This February I had the pleasure of traveling to Paris, France to visit a dear friend. The trip was a 50th birthday present to myself. The last time I had been to Paris was over 27 years ago, when I was living in England for a year. Back then, I wanted to make sure I got to all the "must see" tourist spots. This time I had a different agenda. Yes, I wanted to submerge myself in the magnificent museums and I wanted to walk along the River Seine. But, I also longed to find some way to connect with animals. This is what brought me to the gates of Le Cimetière des Chiens (The Dog Cemetery), which is said to be the oldest pet cemetery in the world.

You might think this was an odd choice of things to do, if my intent was connecting with animals. Quite obviously, there were no living animals in this location. Nevertheless, I was drawn to this sacred spot, just outside of Paris, with such intensity there was no stopping myself. 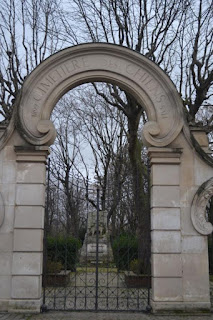 The day was grey as I strolled down the streets of Asnières-sur-Seine from the Metro exit towards the cemetery. I passed a grocery shop and watched men haggling over who knows what (it was all French to me), I spotted an older woman hanging clothes to dry by a window. There were mothers pushing children in strollers. It was a standard slice of life scene which lined my route to those who no longer inhabited corporeal forms.

As I walked, I thought of these two things side by side, life and death. And then I started wondering what was drawing me to the latter, when there were so many sites teaming with life, beckoning me in Paris. Still unsure of the answer, I crossed the final street and saw the gates to Le Cimetière des Chiens and I knew my answer lay in there.


I found the entrance, where I was greeted by the caretaker. After paying a token fee to enter, I crossed into the hallowed grounds. I wasn't sure how I would feel or what I came there to see. But, within a few minutes it was very clear what the answer was.

The first thing I experienced was feeling a gut-wrenching sense of grief for my own animals who had also moved on from their bodies. Each of their faces flashed through my mind and the tears welled in my eyes and streamed down my face. I loved them all so completely, and each had added a level of richness to my life that flooded me with gratitude. Still, I recall saying out loud to myself, "You did not come all this way just to feel sad. Dry your eyes and figure out why you are here." 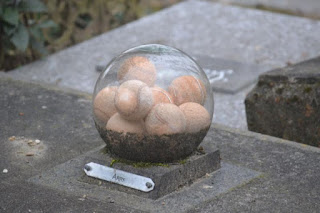 It was at that moment that I knew exactly why I had chosen to come to this place. Just as I had wanted to honor the love and memories of all those who had shared my life, I came here to experience the love of all the people who had felt the same emotions for their animal family members. This was not a sad place. This was a sanctuary of love. Each person wanted to express how much their non-human family member meant to them, and I came to bear witness to this love.

With that, I pulled out my camera and started taking pictures. I'm not a photographer, but I felt compelled to attempt to capture as much of this experience as I could, knowing there was no way my camera could contain the emotions swirling through my body. I felt an intense connection to all those who walked these paths, laying their loved ones to rest. Knowing that we shared the pain of death, but more importantly, shared the even greater joys of life with our furry family members. I felt welcomed and peaceful and, surprisingly, happy as I took in all the mementos that had been left, and the snippets of words from people yearning to convey the love for those they could no longer touch. 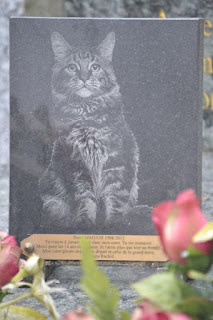 There are more than just dogs buried at of Le Cimetière des Chiens. There are cats, horses, sheep, guinea pigs and at least one monkey that I saw memorialized. Each so unique, and yet all surrounded in the same timeless love.

I spent four hours, meticulously taking in each and every grave. Some were plain and some were ornate. The earliest graves showed signs of decay and cracking, the earth having risen up over time, tipping once straight tombstones and leaving them askew. Some graves had long tributes, while others had simple wording such as a dog's name inside a heart shape with "always loved by daddy" inscribed below. The cemetery itself showed just as much diversity in both the residents and their people, as did the happenings on the streets I walked through to get here. Life and death, right next to each other and not so very different in some ways. 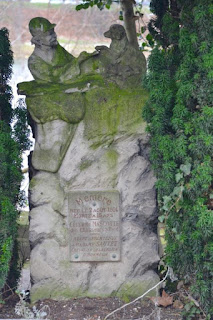 As I was getting ready to go,an elderly man entered the cemetery accompanied by a very large dog. I noticed he stopped at a grave, where he set down a bag he was carrying. His dog stood patiently by his side. From the bag, he took some garden tools, slowly bent over and began tending the grave. I watched him ever so gently pull weeds and tidy up piles of soil. All the while his dog lay by him, nearly motionless.

Finally, I could no longer contain myself and I softly approached the gentleman and asked if this was his dog's grave he was caring for. He looked up and started answering me in French.

My heart ached because all I could say in French to respond was, "I'm sorry, but I don't speak French." However, my lack of a common spoken language didn't faze him one bit. He continued for a full ten minutes about his dog, showing me a picture from his phone.As he spoke, I knew exactly what he was saying. 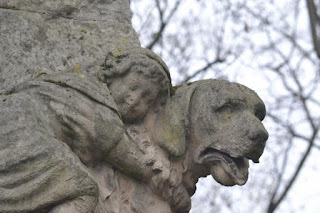 No, I didn't magically start understanding his native tongue. But, I knew with every fiber of my being that he was telling me all about the great love he shared with his majestic Mastiff. I knew, because I have those same stories of love myself about my own animals. I could see it in his eyes, I could hear it in the tremble of his voice. When he was finished, he gingerly turned back to the grave to continue its care. I felt honored he had shared his love with me.

The sun was beginning to dip low in the sky and a soft mist caressed my face. I knew it was time to leave. I also knew, with all the beauty France had to offer, for me, I had found its loveliest place of all.